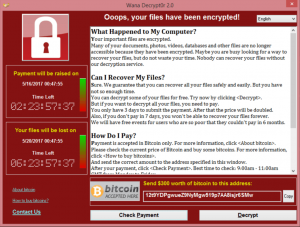 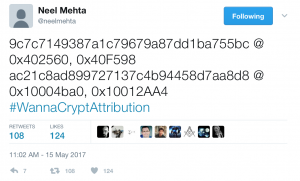 The tweet referenced hashes of two examples, one of the current WannaCrypt ransomware campaign, and a sample linked to the Lazarus ATP group from February 2015. Breaches and operations conducted by the Lazarus group, including the Sony wiper attack, had previously been attributed to the government of North Korea (DPRK).

Researchers have reviewed the locations in the binaries mentioned by Neel and identified that both samples share the same code, have similar functions, and very similar modules in several locations. As such, many security researches have attributed the WannaCrypt ransomware campaign to the DPRK. Kudelski Security urges caution when attempting attribution based on similarities in binaries as several state sponsored threat actors often repurpose code in other to obfuscate the true origin of malware and tools.

A word about the Bitcoin wallets used

The Kudelski Security Cyber Fusion Center has continued to monitor the three bitcoin wallets found the various WannaCrypt samples. As of the time of this writing, the three wallets have received a total of 34.9 Bitcoins ($61,153.77 USD at current exchange rates) from 232 unique transactions. That is a large increase from the $27,614 USD observed early this morning.

It is likely that as organizations and users arrived at work this morning, several have chosen to pay the ransom in an attempt to restore access to critical files: Over the weekend and throughout Monday morning and afternoon Kudelski Security has continued to monitor developments related to the Wana Decrypt0r 2.0 / WannaCrypt ransomware. Since our last update, we’ve seen at least two new variants of the ransomware which include new “kill switch” domains. Luckily, these new samples have been quickly identified and the additional domains have been registered, thus stopping the spread of these new variants.

Over the weekend the Kudelski Security Cyber Fusion Center team examined available WannaCrypt examples and discovered that both the “worm code” and the portions of the malware which deploy the actual ransomware payload are highly modular. The modular nature of these variants means that we can expect to see modified examples that attempt to deploy other ransomware or malware variants. Additionally, the worming code can easily be replaced to leverage other remote code execution (RCE) vulnerabilities as they become available.

Analysis by Microsoft, Kudelski Security, and several other organizations has also identified that the EternalBlue exploit code leveraged by currently available examples of the WannaCrypt ransomware appear to only target the Windows 7 and Windows Server 2008 (or earlier) platforms. As such, organizations or users with Windows 10 were not affected by this attack.

Decryption is a manual process

Independent security researchers investigating samples of the WannaCrypt ransomware have discovered that the ransomware requires manual intervention from “operators” to provide the decryption keys. Additionally, there has not yet been any independent verification that paying the ransom actually ensures that files are decrypted. Kudelski Security recommends that affected organizations do not pay the ransom.

The initial infection vector that caused the start of the campaign in Europe is still unknown. While most ransomware campaigns spread by either phishing campaigns or by leveraging exploit kits. However, in this case researchers have not yet identified any email examples or exploit kit landing pages which distribute to the WannaCrypt` variants which such havoc over the last 3 days.

Additionally, are further review of the malicious binaries, we’ve identified that all RF1918 (private) netblocks as well as randomly generated internet netblocks are also scanned looking for further propagation avenues. This means that organizations could also potentially be affected by way of site-to-site VPN connection with business partners or vendors. The ransomware has also spread via guest wifi, thus users should be cautious as it is possible they could be affected while connected to an open wifi hotspot.

The following Bitcoin wallets have been linked to this ransomware campaign:

Wana Decrypt0r 2.0 is a variant of the WannaCrypt ransomware family that is currently being spread by exploiting EternalBlue (MS17-010). Wana Decrypt0r 2.0 encrypts several file types on an infected computer demands a ransom of $300 USD in Bitcoin to decrypt the inaccessible files.